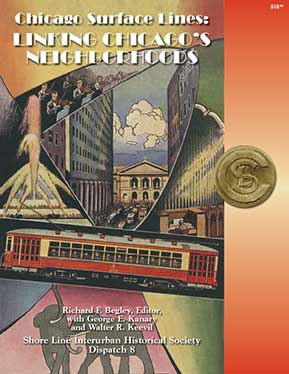 Chicago is a city of neighborhoods, with residents self-identifying as being from, for example, Hyde Park or Albany Park or Beverly or Uptown. The neighborhoods are where things happened: education, entertainment, shopping—the everyday things of life. The neighborhoods in the 1940s and 1950s were like villages where “everybody knew your name.” The common denominator? The streetcars of the Chicago Surface Lines which, while serving the individual neighborhoods, also linked them to other neighborhoods, near and far.

Dispatch 8 covers 12 of CSL’s streetcar lines from January 1, 1945 until the end of streetcar service. These 12 routes (including Broadway-State, Western, 63rd Street and Lawrence) carried about 20% of CSL’s total originating revenue passengers with an average of 521 streetcars daily. Eight of the 12 routes covered served only outlying neighborhoods and did not even enter the Central Business District.

The Dispatch includes detailed narratives on the routes and George Kanary takes us for a long ride on the Cottage Grove line, reliving his experiences on the route.

A Great Gift for “Chicago” Buffs, Railfans and Otherwise.