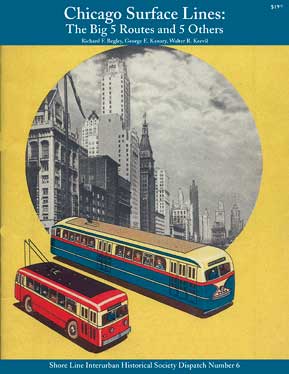 Dispatch No. 6, Chicago Surface Lines: The Big 5 Routes and 5 Others

Dispatch No. 6 is Chicago Surface Lines: The Big 5 Routes and 5 Others by Richard F. Begley, George E. Kanary, and Walter R. Keevil. This 100-page publication was published in December 2015.

This is the perfect gift for family and friends as it is as much a history of Chicago itself as it is of Chicago’s street railway system.

In 1931, the five largest Chicago Surface Lines routes, in terms of originating revenue passengers, were Ashland, Clark-Wentworth, Halsted, Madison and Milwaukee. The combined riding on these routes was greater than the total riding in many medium-sized American cities. CSL also had some very small routes in terms of ridership and they demonstrate the diversity of CSL’s operations.

George Kanary vividly relives the sights, sounds and aroma of the countless neighborhoods that the Halsted cars traversed from the north to the far southwest side including passing by Chicago’s famous Stock Yards. George rode this line from end-to-end many times as a kid and as an adult for the thrill of a ride on a CSL streetcar soaking in the neighborhood scenes.

Chicago Surface Lines: The Big 5 Routes and 5 Others explores in depth ten fascinating routes, the principal streetcar types used and a chronology of significant events from 1945 to 1958 with detailed text and over 110 thoroughly captioned photographs in 100 pages including then/now photo comparisons in black & white and color showing the changes in some of the neighborhoods where the cars ran.